A promising start to this discipline marked its first decade thanks to its potential as researchers who contributed to the design and manufacture of the first integrated circuits, the realization of a clean room of experimentation, as well as the organization of the first edition of the ICM International Microelectronics Conference in 1988. During its second decade, especially in 2003, the microelectronic laboratory became a division named “Microelectronics and Nanotechnology Division (DMN)”, where the R & D activity focused on: electrical characterization and reliability semiconductor devices, FPGA design, analog and radio frequency integrated circuit design, and VLSI tool development. Moreover, the DMN has launched the project for the realization of the Micro-Manufacturing Technological Platform within the new headquarters of the CDTA (in Baba Hassen, Algiers), it was a pioneering project in Africa and the Arab world. This decade was also marked by; (i) the launch of the RASIC project at national level, (ii) the launch of the TEMPUS project with the EU for the training of trainers in the field of microelectronics, and (iii) the creation of the MEMS activity for the design and manufacture of sensors and actuators. The last decade has been marked by the investment in the human potential through the recruitment of the staff, the consolidation of the training of the researchers (Masters and PhDs), the reception of the project of Technological Platform of Micro-manufacturing, the production line of electronic boards on PCB, as well as the reception of the project of the MEMS components realization platform. 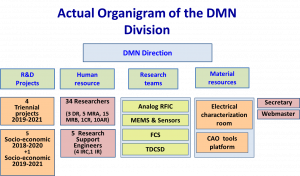 Currently, the R & D activity of the division includes about ten triennial (FNR) and socio-economic research projects. These projects focus on the design of RF and mixed integrated circuits, the design of integrated circuits and digital systems, the design and production of MEMS and sensor microsystems, the development of CAD-VLSI tools, and the simulation of technological processes, electrical characterization and reliability of semiconductor devices and ICs. These research and development themes are supported by four research teams:

To lead these R & D themes, the Microelectronics and Nanotechnology Division relies on its integrated circuit design platform, on its electrical characterization room, and also works in close collaboration with the microsystems platform (MEMS room), and the Technological Center of Micro-manufacturing. Prospects remain promising for the promotion of microelectronics in Algeria and the rapprochement of the socio-economic sector.

Director of the DMN